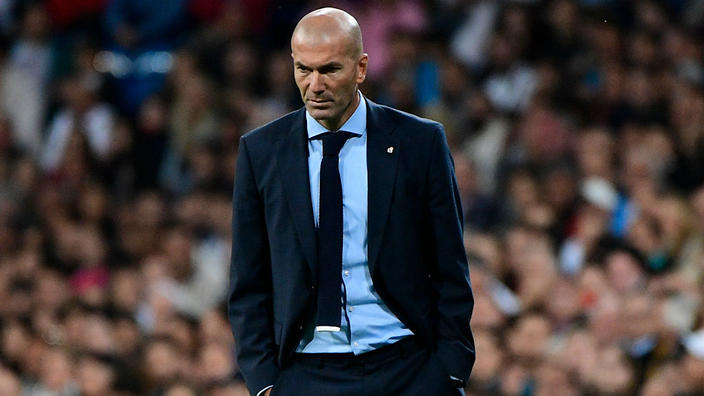 If we have to judge by their performance in Girona, Real Madrid seem determined to abandon all hopes of retaining their La Liga crown well before Christmas. Of course, there’s still plenty of tournament ahead, including two head-to-head matches against leaders Barcelona, but for lack of a better description, Zinedine Zidane’s team looks almost bored with the competition this season.

Girona was just another instance in the growing pile of indifferent displays Real Madrid have accumulated since Valencia drew at the Santiago Bernabeu in the second match of this La Liga calendar. Up to today, their results away from home had almost compensated for the bureaucratic pace at the Bernabeu, but a firm Girona managed to break Real Madrid’s impressive winning streak when they travel.

Eight points behind Barcelona after ten matches is a telling figure that should not surprise those who have been watching the team after they won the European and Spanish Supercups. Their promising start faded quickly; the poor results at home are — if you allow me the easy twist of words – just that, the result of their lack of focus, lack of bite, lack of attitude.

Girona was a perfect example of how the season has gone so far for the Madridistas, highlighting both the scarce positives and the increasing negatives. Isco played another fantastic match, as he led every offensive move of his team and generated so many openings that at times it appeared that Luka Modric and Toni Kroos had deferred completely the offense to the small playmaker. Isco has taken up where he left it last season, and at this point he never shies away from the responsibility of organising his team’s attack. It’s fantastic to see him so mature, stepping up when required.

As Isco grew during the match, the rest of the midfield offered precious little. Annoyed with Girona’s tactical fouling, which — obviously well coached — prevented a few of Real Madrid’s classic counters, Kroos and Modric were largely ineffective. Casemiro played his worst match in a white shirt since he came back from Porto, looking shockingly soft, almost scared to see a yellow, when trying to win the ball. Up front, Cristiano and especially the more and more controversial Benzema, only connected with the rest of the team in the first half, lacking service and of course not offering enough movement to their teammates.

Marcelo, frustratingly inaccurate in his passing and overwhelmed by Maffeo’s stamina, played well below his best, while Achraf did reasonably well at the back, but, similarly to other matches, struggled to find a team mate with his crosses.

Zidane gave this match the importance it deserved, which is why the result is even more concerning. He fielded the best line-up he had available, and despite some bizarre positioning for long spells of the first half – Casemiro played closer to the forwards than Modric or Kroos – his approach made sense. Many will point to Girona’s Machin’s excellent reading of the match, and they are right. But the lack of will Zidane’s players showed meant that Girona won every ball in dispute, and that several of their offensive plays got much further than they should have.

When things got desperate in the second half, Zidane’s solution also looked sensible, at least on paper. Three centrebacks with Casemiro in the middle, flanked by Nacho and Ramos, while Asensio and Lucas Vazquez occupied the wings offering width and, in theory, the ability to reach the line. However, it’s been quite a while since Lucas last played a consistent match, and Asensio, one tough shot aside, preferred to risk crosses without many chances of finding a target.

The issues the French manager needs to address are two, and they may well be related. First, the lack of attitude has been a latent problem in a few of the home matches. It seems as though the team has lost the hunger they had last season, during which they came back from behind in the last few minutes of a handful of matches, precisely because they did not give up. We have not yet seen that will to win, that level of energy when things go wrong, that belief that they can turn a match around when required.

The second issue has to do with the bench. After a summer full of rumours but no final signing to complete the squad, this 23-man team is indeed weaker than last season’s. Either off the bench or starting in less demanding matches, Alvaro Morata and James Rodriguez contributed quite significantly to the title, and at this point there are no similar alternatives when Zidane wants to change the pace of a match. This lack of options has probably relaxed some of the starters as well, with the ensuing loss of intensity we’ve witnessed.

Even if his tactical moves are beyond critique, the coach has a lot of responsibility to shoulder when Barcelona open an eight-point advantage. Zidane needs to recover the level of motivation this team has shown in the past, be it through new faces to increase competition or using the impressive influence he can exert on most players. Come January, another signing that can finish what the team produces would make sense, but there are still two difficult months ahead, with matches against Atletico de Madrid and Barcelona included, for which the French coach has to use what he has a lot better than he’d done up to now. He needs to introduce a couple of changes quickly. So quickly, in fact, that they need to be up and running by next Wednesday in Wembley, where Real Madrid are due to visit Tottenham,