Zidane needs to find a way to make this team tick

If we analyse the three matches Real Madrid played last week — Girona, Tottenham Hotspurs, UD Las Palmas –, only two Real Madrid starters looked in decent shape. In this case, “shape” includes not only their level of fitness, but also the amount of focus they put on the game itself and their level of motivation.

Isco and Sergio Ramos are carrying this team on their shoulders, with precious little help from the rest of the squad. Of course, Marco Asensio can create a piece of beauty out of nowhere, just like he did last evening against Las Palmas. Other players also contribute every once in a while, and the addition of the promising Vallejo, who had his La Liga debut last night, are good news. But the fact is that, offensively, Isco is the only member of the team currently able to  generate a situation of advantage for Real Madrid, while defensively and also from a motivation stand point, Ramos is the only one keeping everyone focused and pushing the team forward when it matters.

In some cases, it feels like a question of fitness, and that should improve in the next few weeks. However, other players look bored, not quite into it, and in order to solve that Zinedine Zidane needs to intervene either subbing some starters or getting them back to their old, motivated selves with some pep talks.

Last evening’s victory over Las Palmas was indeed a very bizarre match. We saw less than 70,000 fans at the Santiago Bernabeu for the first time in a long while. The combination of the poor attendance and the arrival of the low temperatures to the city generated a cold atmosphere, almost indifferent. The two defeats in a row in Girona and London also added a touch of negativity: everything was ready for Karim Benzema to have an early miss – minute four – so that the Bernabeu faithful could vent their dissatisfaction with the perfect scapegoat.

Benzema’s miss was terrible. The French forward had all the time in the world to prepare his finish, and did so in such a hesitant, feeble manner that even before he struck the ball it was obvious he would not score. But that wasn’t all. A few minutes later, Benzema failed to head a glorious cross from Asensio, and since that moment his participation in the match was completely meaningless until he was subbed in the second half.

Zidane’s insistence with Benz is understandable. They obviously have a special relationship, and the former has seen the latter play at an extremely high level. But at this point Benz is a dead weight; not even his ability to get others involved should save him now, as he looks careless with the ball, lacking intent and motivation.

With Isco on top form, Zidane needs to get more players in that same level, and the most evident candidate for that is precisely Marco Asensio. On top of his cracker, he offered quite a few good moves and crosses, but the fact is that Zidane hasn’t been able to exploit Asensio’s talents to the maximum yet. The kid needs to get the ball in one-on-one situations, facing the goal, and that very rarely happens with the current configuration. The solution seems simple enough, even though these things rarely are: Asensio should start in Benz’s place, playing on a free role like Isco, and associating with either of the fullbacks to create unbalances in the opponents’ defence. Ronaldo would play as a pure nine, which is what he does best now. And with that line-up, the quality of the passing and the constant exchange of positions would make Real Madrid a very hard team to defend. 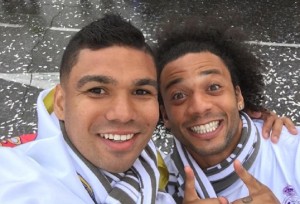 Of course, that assumes that Zidane finds a way to recover at least the Casemiro and the Marcelo of April and May. Right now, those memories feel like a distant dream, as the Brazilian duo struggle to find their closest teammate with a four-yard pass.

The international break buys Zidane some time, but in two weeks Real Madrid will have to pay their first visit to the Wanda. Surely a memorable occasion that demands the best possible attitude from the whole team. Unless the French manager finds something that makes this squad tick like they did last season, this term seems bound to be mediocre.

3 thoughts on “Headed for a mediocre season?”