Maybe it’s because my kids are away at university now and I’ve got too much time on my hands, but I’ve been watching a lot of old footy-related stuff on Youtube recently, and it’s always educational.  And some of the stuff I’ve seen this past week fits nicely with some of the themes that have some up during this latest weekend in Spain.

Valencia lost their first game, as I’m sure you noticed, away at Getafe.  It wasn’t a surprising result in the sense that Getafe are having a half-decent season, and the jury is still out on whether Valencia are here to stay, but the result was certainly an unfortunate one for the visitors, given the fact that Barça’s 2-2 draw the day before at home to Celta (which was surprising) gave the chasing pack (if such they can be called) a sliver of hope, or a sight at last of Barcelona’s butt, hopping like a white-tailed rabbit in the murky distance.  Not a good day to choose to lose your first game, but it often seems to happen like that.  Teams wait desperately for the leader to finally drop a couple of points, and the resulting necessity to win seems to freeze those same pursuers.  See Real Madrid’s parallel failure to defeat Athletic up in Bilbao (it finished 0-0), although they couldn’t be accused of not trying.

But…back to the Youtube connection.  I decided to punch in some unusual-sounding games from the past that had recently taken place in the present, for example Huddersfield v Man Utd, and chanced upon a 1971 encounter.  There are lots of things you notice straight away, such as the sponsor-less shirts, the toilet rolls being thrown (whatever happened to that noble art?) the ludicrous amount of time the goalkeepers had the ball in their arms, doing nothing in particular – but the thing you most notice is the dire state of the pitches.  That’s not 1971 (below), but you take my point. 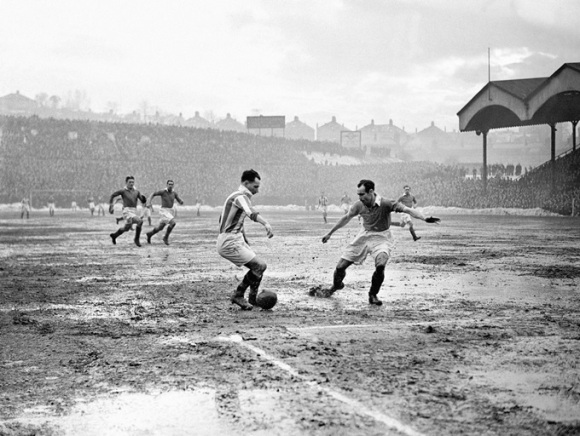 If you watch a game from Spain of the same period, it’s pretty much the same.  In much of the country, the weather is/was no better than in Britain, and even in the stereotypically dry south where every second chap was a flamenco player and the women spent their lives fanning themselves in the midday heat, the pitches were rock-hard and bouncy, requiring a level of ball control that is almost unnecessary nowadays.  Which is a long-winded way of saying that Dani Parejo’s post-match complaint – that Getafe’s pitch was too dry and ‘impossible to play on’ seems a bit rich.   If that’s all it takes to beat Valencia, then we might as well give Barça the title now.   Was this skulduggery on the part of Getafe, who would have noted beforehand how Valencia’s fast-paced play requires the ball to also move at speed?  Probably so.  But if you want to win titles, you have to find ways around this sort of inconvenience.  Great winning goal from Markel Bergara too, although it took a wee deflection on the way in. It’s nice to see him doing so well again.  Here’s a snap below with me and him from last year.  When he asked, I didn’t have the heart to turn him down. 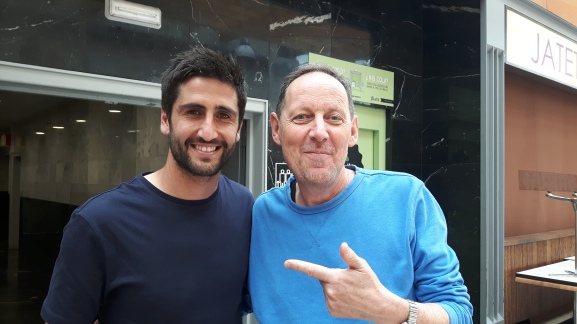 I was thinking about Bergara on Saturday in fact, precisely at the point when Atlético Madrid were blowing down Real Sociedad’s straw house, timidly constructed in the first half in the Wanda (0-1), but soon dealt with when the big bad wolves of Atlético decided to get a bit more physical, a bit more aggressive in their approach after the break.  Thus did they turn the score around, and become the only side within sight of the rabbit’s white tail to actually win this weekend, Antoine Griezmann doing the usual against his old side, and almost celebrating this time.

Atlético had a range of players to call on for the comeback, but what characterises the best sides in any league is the combination of ball-playing creative types alongside others who can mix things a bit, and knock an elegant but frail side like Real Sociedad completely off their stride.  The frail side might be okay for the first half, when their legs are still fresh and their possession game is paying dividends, but when the going gets tough, you need a Markel Bergara type to hold the straw house together.  Sociedad’s coach Eusebio likes the ball players, the touch-and-go types, and decided to let Bergara leave on loan to Getafe, where he has not only bolstered the Madrid side but also scored a potful of goals for them, turning him into a more complete player than even he thought he was.  Atlético, however, have Koke – certainly one of Spain’s best ‘combi’ players (hard and skilful at the same time), Saúl and Gabi as well fit this profile, and central defenders who can play, (Godín, Gimenez) plus Thomas, who has given them more muscle but who can also pass a ball.  In the end, a collective of these types (with a Griezmann up front) will overpower a side with hardly any of them at all.

On my Youtube wanderings, I came across Graeme Souness, one of the most underrated players of recent history, methinks – if only in the sense that he rarely figures among the lists of all-time greats.  But he was the perfect combination of the two aspects, of the ball-player and of the big bad wolf. No coach in the history of the game would ever have turned a Souness away.  He was truly scary, but boy could he play.

Other wolves like Roy Keane spring to mind, or the Frenchman Patrick Vieira, for some the perfect model of the ‘combi’ player, along with Frank Rijkaard perhaps – except that the latter always looked like a nice guy, out for a stroll in the park.  In Spain, the most recent exemplar was possibly Xabi Alonso, a player who was harder than he often looked, and whilst it is true that Real Madrid’s recent fortunes began to flower when Casemiro emerged from his loan period, it is equally apt to point out that the discovery and subsequent use of a player like this will free those around him – think Kroos and Modric for example.  Real Madrid’s current problem is that all three of them have lost their form and bearings at the same time, reversing the rule of positive contamination into a negative.

Did Xavi finally emerge because of Busquets, or did Busquets emerge because of Xavi?  Take your pick. Obviously Xavi was around before him, but when Busquets joined the party in 2008, Xavi moved into the stratosphere.  All the great sides have had this type of player, and Deportivo look back nostalgically now on the period and influence of Mauro Silva.  Valencia’s own pretensions to the crown seem to have been bolstered by the arrival of Geoff Kondogbia, another player who threatens to become a key combi man, but who hasn’t quite made it yet.  Indeed, Valencia’s last great period coincided with the presence of midfielder Ruben Baraja, another example of the player who could do the whole lot.  Is it my imagination, or are there just fewer of these types around now?

This week the Champions League resumes, and Real Madrid’s toothache, although they have already qualified for the next round, may well inflame with  the visit of Borussia Dortmund, not as poor as they look.  Barcelona are through, Sevilla look as though they’ll join them and Atlético must hope for an unlikely win at Chelsea combined with an unlikely slip-up by Roma against Qarabag.  Stranger things have happened, but it seems unfortunate that just as Simeone’s stormtroopers are gathering momentum, the Europa League beckons.

After those games, Real Madrid v Sevilla looks the pick of next weekend’s matches, along with Villarreal v Barcelona and the dog-eat-dog encounter between Alavés and Las Palmas.  Villarreal stumbled once again at Leganes at the weekend (3-1), but could do themselves and the rest a favour by returning to form next week.  All still to play for?  Just about!

4 thoughts on “Poor pitches, combi players and the rabbit’s tail”