Some young players have a special gift for announcing their presence to the football world. Dani Raba, hitherto a player floating quietly on the margins of Villarreal’s first team, decided on Sunday night to leave his calling card in the possession of Sergi Busquets, and the rest, as they say…..could be history.  Up to that point in the 60th minute of the game at La Ceramica, Villarreal were beginning to struggle a little and the sand of the game might have slipped through their fingers anyway, but as Busquets flew, so did the home side’s chances of taking anything from the game.  Twelve minutes later, Luis Suarez scored the inevitable, followed ten minutes later by the even more inevitable second from Messi.  A third successive game without a win would have left Barcelona’s flank more vulnerable, especially with the clásico now visible on the horizon.  As it stands, despite Raba’s contribution, the league is still alive. 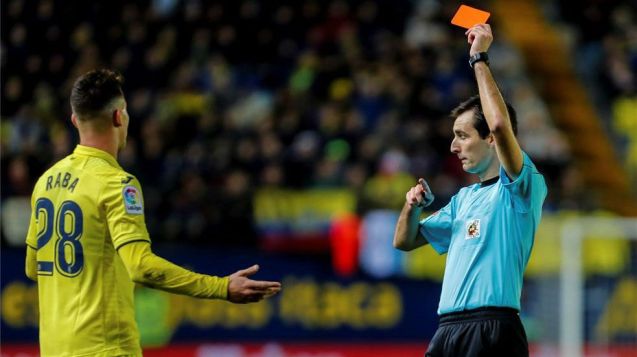 The Villarreal v Barcelona fixture is an odd one, in the sense that every time it comes around you think that Barcelona might struggle, and yet the statistics kill such thoughts with some conviction.  Barça haven’t lost to Villarreal since the 2007-08 season, a run which takes in 18 games in league and cups. Their coach Ernesto Valverde was of course the yellow submarine’s coach once upon a time, earning himself his only sacking after 32 games (season 09-10), and the major question mark of his career so far.  Valverde will have quietly enjoyed the three points, but must be getting used to visiting his ex-teams of late, having recently returned to Athletic, Olympiakos and Valencia in the space of a couple of months.

However, Valencia’s players, watching Valverde’s troops on their TV’s, will have had cause to include Villarreal’s Raba in their nightly imprecations, since his foul keeps them at five points’ distance.  Valencia did their homework beating Celta 2-1 the previous night in an entertaining game.   Atlético’s 1-0 win at Betis also keeps them within a plausible distance, but as Real Madrid fly off to Abu Dhabi for a bit of light entertainment in the guise of the Club World Cup, or whatever it’s called, the rest of La Liga’s teams will be playing next weekend’s fixtures in the shadow of the clásico in a fortnight’s time – except Leganés, of course, who would have been handed the privilege of playing Madrid the weekend before the big one.  Barcelona will have Deportivo at home for sparring practice, and will probably pretend that Busquets needs a rest after Raba’s foul on him, when in fact they would simply prefer him not to get a fifth yellow card against the Galicians, in their visit late next Sunday night.

At least Real Madrid showed signs of resuscitation against Sevilla, and the 5-0 scoreline at half-time seemed to mock the Andalusian visitors’ pre-game pretensions to the Champions League places. Improving of late, with three wins on the trot, there were plenty of observers who were predicting that Sevilla would win and mark the official end of Madrid’s league season, leaving them to their Abu Dhabi adventure, the Copa del Rey, an eventual ceding of their Champions League crown and worst of all, a relatively insipid clásico – one in which a home win for Madrid would hardly register on the Richter Scale. Now at least, due to this weekend’s events (Dani Rabas’s interference notwithstanding) the faint hopes of a competitive league beyond the Christmas break have been kept alive.

Perhaps Real Madrid are just a bit weird, and needed the frisson of this challenge to their season to wake them from their torpor.  Analysts will point to the presence of Asensio and Lucas Vázquez in the initial line-up, and Isco on the bench to the improvement in the side, but it’s probably more a case of fresh legs.  Ronaldo, fresh from a good ego boost the previous week, with his five golden balls on display at the Bernabow, finally managed to start scoring again in the league, with a brace. Karim Benzema hit the post, so he’s getting warmer.  The young centre-back Jesus Vallejo, of whom good things are spoken, was also on from the start for the suspended Ramos, and looked assured.  Toni Kroos looked better than in previous weeks and even Achraf opened his scoring account, making him the first ever Moroccan to score for Real Madrid in their history.

Well he’s actually the first Moroccan to play for Real Madrid in their 115-year history, which is interesting.  If you really want to know, a total of 34 nationalities have played for the club (35 if you include the Republic of Catalunya, but I don’t wish to appear sarcastic), of which the non-Spanish majority (39) are from Argentina, followed by 32 from Brazil. From Europe, it’s actually France with 18 players who top the league of Madrid imports, followed by Germany (11).  Only four African nations were previously represented in Madrid’s history (Togo, Mali, Cameroon and Ghana) but now Morocco makes it five.  Achraf will be just fine if he continues to shine, and Real Sociedad too, because Madrid would consequently decide to leave Alvaro Odriozola in his native Basque region, which would be nice of them. 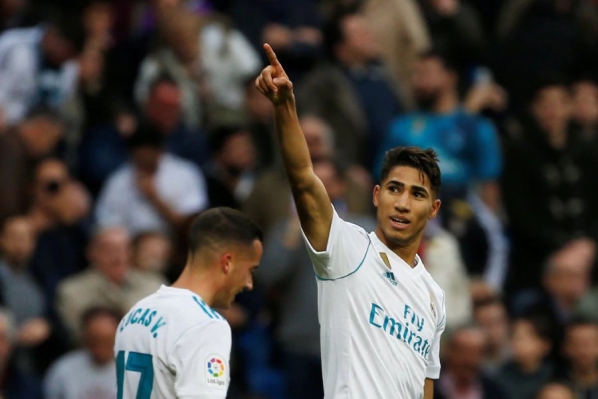 Looking at the league as a whole, the general shape of the standings is unusual, now that we’ve had fifteen games.  Barça may be five points ahead, but that’s a piddling gap compared to the one that’s just opened up in the English Premier, for example, but not only with respect to Man City’s eleven-point lead.  The difference between Arsenal in 5th place and Huddersfield in 12th is also eleven points.   In Spain, Sevilla lie 5th with 28 points, and Villarreal sit seven points adrift of them, in 6th place. Below these European placings, only six points separates Villarreal from Deportivo, in 17th place just above the relegation spots.  Or down to Eibar in 12th place, there is a mere three-point gap.  It’s hardly an abyss, and the even spread of points suggests a more balanced league this season. Indeed, as the bottom three of Alavés, Malaga and Las Palmas begin to show signs of improvement, nothing seems very certain as we approach the Christmas break, certainly nothing that a couple of consecutive wins wouldn’t put right.  Las Palmas, bottom on ten points, need not despair just yet.

3 thoughts on “Life in La Liga yet”