It’s been a pretty intense return from the Christmas break, with Coutinho arriving late down the chimney and Diego Costa starting both where he left off, and how he intends to go on.  You can’t keep a good man down.  Nevertheless, pride of place this weekend goes to the irrepressible Joaquin, who when he eventually retires will become a stand-up comedian of some stature.  Betis’ finest son has long been a breath of fresh air in the stifling world of tight-lipped correctness that accompanies most professional footballers’ press conferences, fearful as they are of upsetting their sponsors or of saying anything that might vaguely be of interest.  And whilst Joaquin may never be invited to address the Oxford Union, his post-match statement after his team’s bonkers 3-5 win in the Seville derby is already Spanish literary legend.  Asked whether the Betis players would rest or celebrate the remarkable win, Joaquin answered with a straight face ‘No no, hoy no se puede descansar – y el que llegue antes de las 5 de la mañana a su casa tiene multa’ (No way. We can’t rest.  And anyone who gets home before 5 in the morning will be fined).  You just know that if he said that in front of the BBC cameras after Match of the Day he’d be asked ‘to explain his comments’ to the FA  within a period of five days.

Then again, the idea that Spain is more liberal in sporting contexts is not borne out by the goings-on at The Willy-Wanda stadium, where Atlético Madrid kicked off the return to action with a 2-0 win over neighbours Getafe.  Diego Costa managed to defy the laws of probability in the first half of the game in which eight players were booked but he was not amongst them.  What kind of odds would you have got on that bet?  Costa, of course, was not strictly making his re-debut, since he had played (and scored) in Atlético’s 0-4 win at little Lleida in the King’s Cup in midweek, but he was back in front of his old fans for the first time since 2014 when he left the old Calderon to seek pastures new at Chelsea.  So naturally, when he scored the second goal in the 67th minute, he ran to his adoring flock and allowed himself to be embraced by them, earning himself a second yellow card (the first he’d earned six minutes earlier for a classic elbow) and a predictable return to La Liga action. 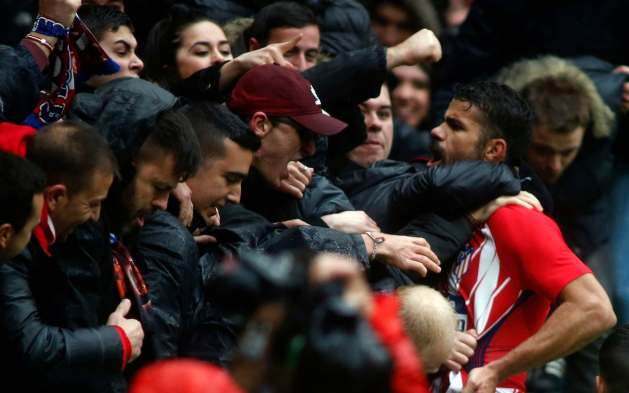 Whatever, things will be inevitably more entertaining from now until summer.  Atlético, well though they have maintained their semi-chase of Barcelona (they are seven points behind them), seemed to be leaking a bit of testosterone, a bit of what always made them feared. Costa has immediately restored the balance and pushed the aggression scale back up to acceptable heights, where Simeone best likes them.  As a coach, you can gesticulate and hop until the cows come home, but unless there is someone out on the pitch who can truly translate your inner demons into exterior realities, things will begin to dip, particularly after six years of the same.  Costa restores the true spirit of bad-guy edginess to Atlético, and distracts defenders with his constant niggling and running.  Simeone’s great phrase after the game ‘Costa transmite miedo’ (Costa scares people) was spot-on.   Costa never looked right in a Chelsea shirt, whose clean lines and its decent blue were too soft for him.  So on the date of his return game – January 6th or Twelfth Night, it seems right to quote the clown from Shakespeare’s opus:  ‘Many a good hanging prevents a bad marriage’.   Antonio Conte will no doubt agree, but Costa is back where he belongs.  And with Vitolo still to come (he stayed on the bench on Saturday), don’t count them out just yet.

More prides of place?  Well, we could start this paragraph by asking who the most in-form team in Europe is at the moment, and of course you would all reply ‘Eibar’.  With 19 points from the last 21, they are on a par with those other minnows Man City and Juventus.  Interestingly, despite Eibar’s excellent form, coach Jose Luis Mendilibar has said that he may not stay on after the summer.  Maybe he’s tiring of the circus (he tolerates the Eibar Board, but doesn’t like its members) or perhaps he’s been fingered as the next big name to take over at the Etihad, should Pep fail to lift the Champions League this summer.  Actually, a straight swap would be good.  Barcelona , New York, Munich, Manchester, then Eibar for Pep.  It makes sense and would surely complete his cultural and sporting CV.

But seriously folks, watch out for the boys in the Barça kit. They’ve bought wisely over Christmas, bringing in Fabián Orellana from Valencia (he scored with his first touch on Saturday at Las Palmas) and Pape Diop from Espanyol.  Eibar was recently voted  the 5th ugliest town/city in Spain, a result which earned the ire of its 27,000 residents who complained bitterly that they should have won first place. In the team’s obscure past, this was of course a problem, since players were difficult to attract from other parts of the country, forcing the club to rely on Bilbao and Sociedad cast-offs and loanees. Now they sit above both of their bigger neighbours, in 7th place and a point behind Villarreal in the Europa League placings.  They entertain a decaffeinated Costa-less Atlético next Saturday, which should be interesting.

Next week I’m zapping over to Naples but I’ll be back for Sunday’s game in Anoeta against Barcelona, a game that should presumably feature Phil Coutinho’s debut in a culé shirt. The Madrid press, sorely envious at this signing, have worked their classic trick of sourpuss event-deflation by highlighting Barcelona’s massive spending spree this season (312 million euros), a record amount and 55 million more than Florentino’s famous splurge back in 2009 when he signed Ronaldo, Benzema and company.  Published as a mere league table of spending, the subtext  is to accuse Barcelona of selling their souls to mammon, instead of producing from La Masia as they traditionally claimed to do, giving them the moral high-ground over Real Madrid.  If you wish to go along with that, you can.  Or you can simply conclude that Madrid have not bought as well over the years, not in the sense that they have purchased  duffers but rather that they have not signed as wisely, replacing ageing players with similar types or with different ones to change or maintain the dynamic.  Coutinho is not Iniesta, but he arrives to fill the void that the Iniesta-Xavi double-act represented for so long, and to change it too.  He is a more dynamic player, and it will be interesting to see how Valverde combines him with Messi.  Meanwhile, Zidane decides (correctly) to postpone the signing of goalkeeper Kepa until the summer, in a rare act of intelligence by the Madrid board who continue to look north wistfully in the direction of Eden Hazard. He is their Countinho, but will the Belgian be as attracted to the Bernabéu as Countinho obviously was to the Camp Nou? All will be revealed.

Real Madrid drew 2-2 at Celta in the final game of the weekend (Malaga play Espanyol  on Monday), in an entertaining match which showed why the champions will not repeat the feat this season, either domestically or in Europe.  Bale’s brace is good news for them, but his overall performance was fitful, and he looked tired in the second half.  The ‘No Benzema effect’, save Bale’s opportunism, was unapparent.  Ronaldo was poor and Marcelo has gone from the best full-back in the world to lost soul in the space of six months.  Keylor Navas thanked Zidane for his confidence by saving Iago Aspas’ second-half penalty, but Madrid’s inconsistency, from one half to another, continues to plague them.  They are now fourth, admittedly with a game in hand.  But like their American equivalent, the fire and fury at the White House seems to have been replaced with dysfunction.  Next weekend sees the half-way stage of the season completed, and those with similar dysfunctions will be looking to wipe the new slate clean, and those with healthy houses will be looking to keep the domestic staff working but happy.   See you next week, all the way from Anoeta.