It was the annual event of Barcelona’ season – the game they always dread and the one which has often determined their fates in previous years. I refer to the visit to Anoeta in San Sebastián, effected on Sunday night to close the 19th week, save Monday night’s game at Betis.  Many a culé crisis has traced its roots to Anoeta, and Barça had not won there in the league since Real Sociedad returned from their Second Division exile in 2010, picking up two draws and five defeats.  No other stadium has treated them so meanly.   And it gets worse.  Thirteen of Barça’s current squad had never won in Anoeta, and Luis Suarez had never scored there. Time to wipe the slate clean then, and discourage any thoughts that Atlético Madrid might have been harbouring on Saturday night, as they walked off the pitch at Eibar with a useful 0-1 win under their belts. We can forget about Real Madrid for a while, and let them stew in their own little crisis, as they hang on grimly to 4th place.  There are other matters to talk about first.

I was in Anoeta as promised, armed with umbrella, raincoat, scarf and thermals on yet another brutal Basque winter’s evening.  Maybe Barcelona wouldn’t be up for it?  Ooh – that’s Andre Gomes in the starting line-up, and no Iniesta. Hope springs eternal.  We like Gomes. Nice young man with a well-trimmed beard.  My wife has come along tonight, for which Barça should feel privileged.  You won’t catch her here against Las Palmas and other such ilk.  Indeed, she seems almost put out when Willian José puts Real into the lead in the 12th minute, as if this were somehow against the Elizabethan order of the cosmos, and then happily stunned when Juanmi makes it two.  The runes are rumbling again for Barça, and it’s déjà vu time.  Sociedad are playing splendidly, and ‘Usain’ Ordiozola on the right flank is burning up the wet turf like Roadrunner, out-sprinting even Jordi Alba and panicking the visiting defence into wondering how much it will cost to bring him to the Camp Nou next season, instead of to the Bernabeu. 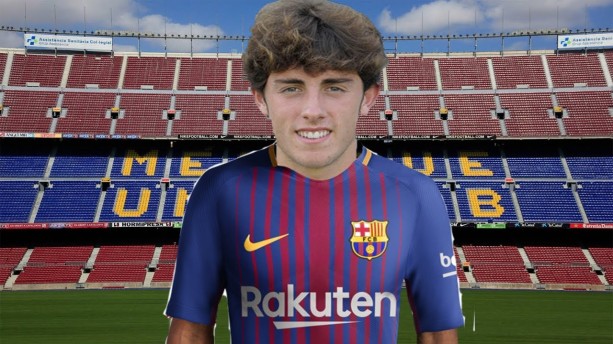 However – and I must be brief tonight because I’ve got back very late from the stadium and have to rise and shine early on Monday morning for an important meeting about setting up another important meeting (an ancient Basque ritual), so I’d like you to consider what one of my more memorable coaches used to say in my playing days, way back in the foggy mists of time.  He had a particular thing about the 5-minute period between minutes 40 and 45, particularly if we were winning.  Like the mythical 7th game in a tennis set, he insisted on the fact that games were won and lost in this period.  It’s an interesting theory, and you can see its logic.  According to him, if you go in 2-0 up at half time, you can only lose the game yourselves.  The other team, slightly demoralised, has to make a difficult decision in the changing-rooms. If they come out all guns blazing, commit too soon and go 3-0 down, it’s game over.  If they wait too long to step up, it could also be game over.  But at 2-1 down in the changing-rooms, it’s a different story, and nobody is demoralised.   I was thinking this around minute 39 when Luis Suarez made an excellent sprint into space on the left, escaped past Sociedad’s back line and pulled the ball back for Paulinho to score.  It was the moment you knew that Barcelona would remain undefeated by the end of their 19th game, the half-way stage in the league campaign. 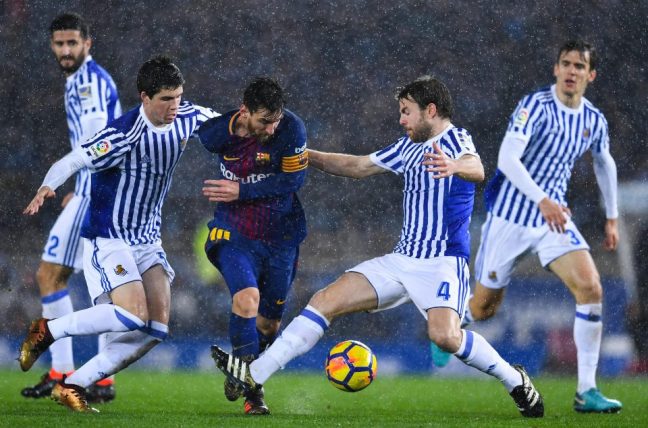 Our coach used to suggest lots of ways in which we could prevent this kind of goal from happening, but Real Sociedad are not that kind of team. At 2-0 and flying, it only occurred to them to get a third.  This was respectable but suicidal, and still a reason to cast doubts over Odriozola’s all-round defensive qualities.  He’s only young, but at that stage of the game, you have to be smarter, and cede ground, not push up.  Suárez escapes from centre-back Llorente, but there is too much space between the full-back and his centre-backs to prevent the pass.  ‘Tighten the lines’ as our manager used to say, for that period of the game.  You could also argue that the period between 45 and 50 minutes is crucial too, because the leading team has emerged from the dressing-room with a strategy to both defend the lead and to look to extend it.  If they concede too quickly, the re-think required can take time to sink in, and a team can lose its way.  Suarez’ excellent goal on 50 minutes thus poured further cold water on the home team’s hopes of a result, and from then on it was just a matter of time.

One has to admit that this new version of Barça is a compelling one.  It’s often better to watch than the metronomic Xavi-led side, and there seems to be an infinity of resources – see Paulinho and Vermaelen.  This Barça is the ‘speedy transition team’.   Instead of chasing down the opposition in packs like they did under Pep and Luis Enrique, they mix possession with periods of rest where they drop deeper, and then hit opposing sides with bewilderingly fast and accurate counters – like the Real Madrid team of last season, ironically.  The nimbly vertical Dembele, who came on in the second half, is another player who fits this pattern snugly. You could ask questions about their first-half performance, and the inaccuracy of some of their midfield play, but you always suspect that they can pull something out of the bag.  You simply cannot afford to make mistakes against them, particularly when you’ve committed players forward.  Give them an inch of space in the wrong places, and they’re lethal.

Elsewhere, Girona wrote some more pages into their record book by stuffing poor Las Palmas 6-0.  Coach Paco Jemez replaced Pako Ayestaran two weeks ago – similar first names and similar bald pates, and similar results so far.  Girona were hoping to do okay this season, but probably hadn’t dreamed of winning a game 6-0 in the top flight.  Now they’re only 3 points shy of a Europa League place at the end of the season’s first half – a season for which most pundits had them doomed from the beginning.  Another interesting aspect of the game was the second-half hat-trick by the Kenyan forward Michael Olunga, who is incidentally a qualified Geomatic Engineer but more significantly the first Kenyan player to score in Spain’s top flight.  He isn’t the first Kenyan to play in La Liga (Mcdonald Mariga holds that distinction) but he’s the first to score.  Might as well score a hat-trick then.

Valencia beat Deportivo 1-2 away to keep up some hopes of staying the pace with Barça and Atlético, but Real Madrid in 4th place are now only a point ahead of their vanquishers, Villarreal, who remarkably won their first ever game at the Bernabéu. It’s an odd statistic, given the yellow submarine’s largely excellent record since they first emerged in the late 1990s, but it’s nevertheless true.  For the record too, Real Madrid are now closer in points to the relegation places than they are to Barcelona. But they needn’t worry.  Karim Benzema will be back from injury soon.