In the end, everything went to plan.  The game featuring the two best defences in Spain’s top flight ended 1-0, with a sublime free-kick strike from Messi – just for a change – and a dogged performance from Atlético that lacked the punch necessary to get a result and prolong the La Liga fun. 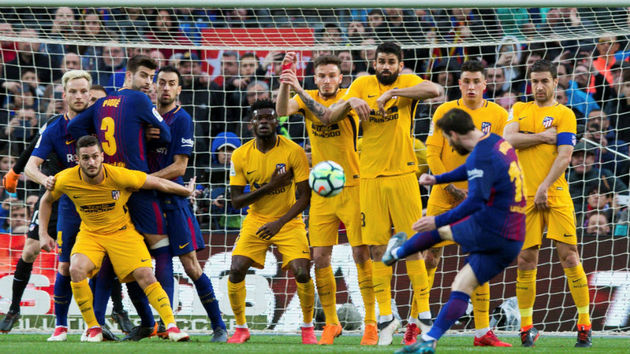 Andre Gomes, who replaced the injured Andres Iniesta in the first half (Chelsea take note) was also booed by his own fans, so nothing new there either.  The only surprise of note was the little pre-match snog in the tunnel between Piqué and Griezmann.   I’m not very good at drawing memes, but a good one would be Griezmann whispering gently into Pique’s ear, ‘Me quedo’ (I’m staying).

The game was slightly disappointing but nevertheless intense, and you could see that Atlético had come with the intention of filling up the midfield (with Thomas as the pivot), holding the fort and then striking later on, when the opportunity might present itself.

It rarely did, even when Simeone threw on Gameiro and Correa, risking defence for all-out attack.  Griezmann and Costa, now baptised ‘AG/DC’ (one of Marca’s better inventions, it has to be said) were never really allowed to connect with the providers, with Busquets and Umtiti as unflappable as ever – as was Gimenez for Atlético, it should also be noted.  Iniesta’s departure saw a certain drop in Barça’s overall play, but Coutinho tried his best to make up for his team-mate’s absence, with an intense and imaginative display.  His transfer looks like one of those natural transitions, as if it were always destined to happen.  He looks exactly right in a Barça shirt, and could have with for them for years.  What a player – wow!  And he’s only going to get better in the present company.

Is this the end, my friends? Waiting for the summer rain?  Musical reference answers on a postcard please.  But it could well be, despite the fact that eight points do not represent an unassailable fortress.  Atlético, suddenly the Madrid press’ darling now that their noisy neighbour’s chances can be discounted, can hope for a couple of things.  One would be that the Champions League, still chock-full of tricky opponents, might tire the Catalans and distract them from the league.  Atlético are also in Europe, but can afford to play some of their second-string for that particular distraction, perhaps until they get to the final.  Barça can hardly contemplate the same policy.

The other hope would be that every season has its dark moments, and Barça haven’t really had one yet.  Their darkest hour was in summer during the Neymar affair, but it proved to be the blackest hour before the dawn.  Barcelona are much better off without him, and (slightly) nicer for it too.  But you feel that something has to give at some point, with zero defeats in 27 league games.  There have been some indications of tiredness of late, and (justifiable) complaints about the scheduling of games.  It would only take a couple of stumbles to reignite Atlético’s fire, but maybe I’m grasping at straws.

Zidane was certainly grasping at them when he remarked, after the 3-1 win at home to Getafe, that the league was difficult but not impossible.  Well, nothing is, philosophically speaking, but Zizou would be better popping his hopes into the PSG oven and keeping the season alive, whilst retaining his own job prospects for the season to come.  The rumours are that the Frenchman fancies a break anyway, and unlike his longer-standing compatriot at Arsenal would rather walk before he is pushed.

Meanwhile, Pochettino, who would be a very good choice, can continue to be the most wanted coach in European football, which must be nice.  If I were his advisor, I’d tell him to stay in London and keep his tasty squad together, because there he can continue to work relatively stress-free and away from the problems that an ego-fuelled dressing-room brings in its wake.  Pochettino has a strong personality, but might just be bored by the prospect of managing a bunch of sulking superstars.  I reckon he’s better off where he is, where all is potential and growth – but the Bernabow has a way of tempting folks in.  However, if an improving Real Madrid can scrap their way through this Champions campaign, the scenario might change again.  Too many ‘ifs’ for a single paragraph, I know.

Valencia consolidated the 4th spot with their 2-0 home win at the expense of Betis, opening up an eight-point gap over Sevilla, who despite beating Athletic lack the consistency or the defensive security  to mount a realistic challenge now.

One interesting little scrap now will be the struggle for third place, which guarantees the Champions League and avoids the messy late summer preliminaries.  Real Madrid, a point above Valencia, are destined to sweat their way to the finishing line.  Valencia, who along with Girona are this season’s revelation, look very good at times and seem to be recovering from their little stutter at the end of January, when they lost 1-4 at home to Madrid, and fell to Atlético and Las Palmas.  Check out their first goal against Betis, and Guedes’ 50-yarder to set up Rodrigo. Great finish too, from a player who looks on his way to Russia (I mean for the World Cup).    Next week they’re away at Sevilla, which will either put the nail in the host’s coffin as regards the Champs League or definitively hand Valencia a default on 4th place.  Should be the game of the weekend, I reckon, although Real Madrid at Eibar also catches the eye. I might try to get along to see that one.

Time for bed, after the stress of watching Real Sociedad win 2-1 at home to Alaves this evening, but don’t forget the delights to come this week with PSG-Madrid on Tuesday and Tottenham-Juventus the day after.