It was one of those weekends in La Liga when everything went to plan, which means that nobody is likely to have become a millionaire on the pools.  Nothing happened to register on the Richter Scale of surprises, and the main news came from England where the Manchester derby attracted most of the headlines, in Spain too – for obvious reasons.  The Spanish press has still not cast off its unhealthy obsession with Guardiola and Mourinho, both of whom it despises with a passion, but the former’s two defeats last week to Liverpool in the Champions League and then to Man Utd had the Spanish hacks wading waist-deep in schadenfreude.

Nevertheless, they did their best to hype up the Madrid derby on Sunday, describing it (in various media) as a ‘game of dignity’ – meaning that although both of them have given up any realistic hopes of catching Barcelona, they’d still like to stuff each other, if possible.  But that was never going to happen, particularly with Real Madrid’s 2nd leg game against Juventus on Wednesday’s horizon and Atlético’s own visit to Portugal the day after.  Although neither of those games looks particularly problematic, the derby in-between lost some of its usual blood-and-death billing, despite the return of Diego Costa to the fray.

As far as things going to plan were concerned, Cristiano and Griezmann both scored, and the game ended in a draw.  Jan Oblak also made some fantastic saves, so nothing new there.  As a consequence, Barcelona (who predictably defeated a battling Leganés in the Camp Nou) are further over the horizon than before , eleven points clear of Atlético, to be precise, and Real Madrid might yet come to regret this 1-1 result (they haven’t won a derby at the Bernabéu now since the Özil days of 2012) because Valencia won again with another goal from the excellent Rodrigo, and go third, a point above the Bernabéu boys.  It was Valencia’s 20th win of the season,  of which 12 have come at home – a statistic only bettered by Barcelona’s 13.  With the UEFA rule-change regarding the teams who finish 4th now, Real Madrid are assured of Champions League football whether they win a third consecutive title or not, but 4th place doesn’t fit them well.  They’ll still want to be league runners-up, just as long as it doesn’t interfere too much with their European ambitions.   They’ll certainly fancy their chances now, especially if Man City fall by the wayside, with the tantalising possibility of a Champs League semi-final or final between the two La Liga behemoths growing by the hour. 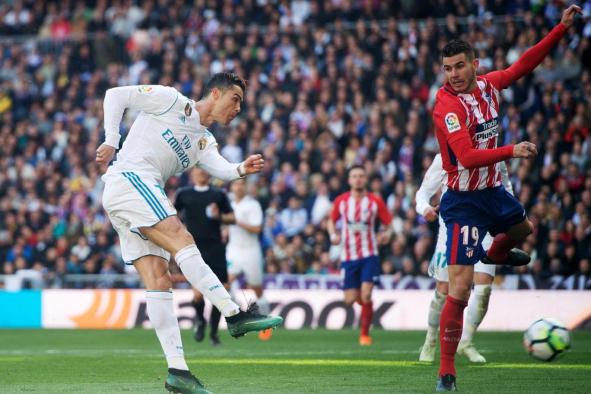 Talking of Barcelona, their 3-1 win over Leganés, mainly achieved due to yet another Messi hat-trick, meant that they equalled Real Sociedad’s record of 38 league games undefeated.  They’ll probably beat the record next weekend, although Valencia (who visit the Camp Nou) might just save Sociedad’s historic bacon.  You never know.  Whatever happens, the achievements of both sides are extraordinary, albeit in different times and contexts.  Both records span two seasons, with Real Sociedad’s run beginning for the last five games of the 78-79 season and ending on the very last game of the 79-80 one – when the top flight played 34 games per campaign.  Barcelona’s run began with Luis Enrique’s last seven games and the first 31 of the present Valverde campaign.  Ter Stegen, incidentally, is the only player to feature in all of the games. 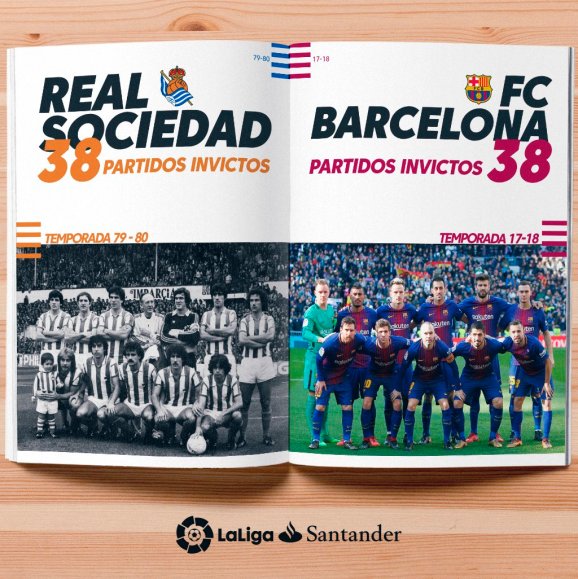 The two runs would make for a good book, for some aspiring and thrusting young author.  You could pull up plenty of historical and sociological roots with your keyboard garden-rake.  Real Sociedad’s run was the first inkling for decades in Spain that the death of Franco was to open up the opportunity for Basque sides (and others) to once again shine – as Athletic had done in the pre-war period.  It wasn’t all Real Madrid, of course, because the fascists in power had been canny enough to understand the attraction of competition, just as long as it didn’t go too far.  Football was for the fascist regime the opium of the people, to misquote Marx.  I’ve never subscribed to the theory that Franco’s regime ‘favoured’ Real Madid (because it’s too simplistic) but they certainly identified with them, yes.  This undoubtedly had an influence on events, since referees and the Spanish FA knew which side their bread was buttered on, but it was interesting that the 1979-1980 season (four years after Franco’s death) featured  Real Sociedad as leaders for the seven games before their final one, away at Sevilla.  Real Madrid, to their credit, stayed alongside and when Sociedad lost that final game their 38-match run came to an end, Madrid took the title and it seemed that the old regime was to continue – if not in body then at least in spirit.  This didn’t happen, however, and the Basque team which consisted entirely of home-grown players (among them Xabi Alonso’s dad) went on to win two consecutive league titles, which were then followed up by two more from the equally home-grown Athletic.  This could never happen now, sadly. The famous 38-game run was, in a sense, a preface to a new era of footballing democracy, although of course, the urban and political power of Real Madrid and Barcelona would eventually  return things to how we know them today.

Barcelona’s current run has been achieved in a different era, where the competition is more based on financial and psychological factors.  The team has a relatively sparse local (Catalan) representation, and is not subject to the political left-overs with which Real Sociedad had to contend.  They also have Messi, whose influence straddles the run like the colossus that he is. Indeed, Sevilla might once again have been the run-enders, had not Messi risen from the bench two weeks ago and saved his side in the dying minutes from what had looked like a certain 2-0 defeat.  In Barcelona’s comparative favour, Real Sociedad were unsaddled by European competition back then, although the size of their squad (the campaign was more or less played by 13 players) reflected those reduced demands on personnel.  By comparison, Barcelona have used 23 different players during this league run.  It’s good, nonetheless, that today’s young supporters understand some of the history of the league they follow.  They might be surprised to learn that Sociedad were the team that preceded this great Barcelona team.

Just to mourn the end of the record, I went along to Anoeta to see Girona visit for the first time since Real’s recent 2nd Division spell, and was pleasantly surprised to watch a 5-0 thrashing of the spunky newcomers, who quite simply had a bad day at the office.  Real were without the suspended Illarramendi and the injured Odriozola, but still won at a canter, in temporary coach Imanol Aguacil’s home premiere as coach.

If you pressure Sociedad high, and fuss their midfield into errors, you’ll basically win.  But if you stand off them and give them space, they’ll murder you.  Despite everything, their 56 goals have only been bettered by Barça, R Madrid and Valencia.  There is talk of Rafa Benitez taking over at Anoeta in the summer.  I sincerely hope not.  He wouldn’t be a good fit, and anyway, Imanol has been doing a great job with the ‘B’ team, who are threatening promotion to Segunda ‘A’.  He’s a home-grown boy, knows the club, and seems to be a better motivator than Eusebio, good though the latter was in imposing a certain style on the team.

Elsewhere, Celta predictably beat a tired Sevilla 4-0, with a hat-trick from Iago Aspas, another chap on fire.  At this rate he’ll be leading the line in Russia.  Levante beat Las Palmas in a dog-eat-dog encounter,  to preserve an eight-point gap over Deportivo in the third relegation spot. Poor Depor won their first in 15 games, beating bottom side Málaga 3-2 in a Friday night cracker, but Levante’s win preserves the status quo. Las Palmas were also hoping to spark a revival, but it’s looking increasingly dire for the bottom three.

Next week’s pick of the bunch looks to be Barcelona v Valencia, with Sevilla v Villarreal an interesting one too, plus the Champions League action too.  Until then.

One thought on “Going to plan”