What is extraordinary about football is the all-pervasive influence of its stadia on our entire perception of a club’s identity.  Even when a team builds a new ground, moves to it and plays there for several years, it never quite manages to bury the memory of the original, whose role in the club’s birth and development – from toddler to pensioner – was total.  This is why a stadium move is a traumatic event, whether it’s done for practical or for purely financial reasons, and sometimes a club never quite manages to recapture its original vibe, so linked was it to the essence of the previous abode.  Real Madrid supporters of a certain ilk and age still refer to the Bernabéu as ‘Chamartín’, Atlético fans are not entirely comfortable with the Wanda and the way they were shooed out of the Calderon, whilst in England, West Ham just don’t seem to be West Ham outside of Upton Park (the Boleyn Ground) – which just goes to show that in the same way as we feel at home in our own stadium, we judge others by the aesthetics and peculiarities of theirs.

Spain is no different to any other country in this respect, and treats its football stadia with almost religious reverence.  There may be lots of petty or significant historical needle between dozens of sides in the country, but in general journalists are careful to pay their respects when they are guests in the house, and visiting fans tend to lift the seats before they piss.  In 26 years of watching La Liga live, I’ve rarely encountered the sort of trouble that once plagued England, where the (often violent) invasion of others’ territory was a fortnightly pastime for travelling fans.  And if there is trouble now in Spain, fans tend to organise their cock-baiting sessions away from the stadium (think of Atlético and Deportivo in 2014), in a sort of symbolic recognition that violence must be acted out somewhere other than on hallowed ground.  Perhaps that’s why Tebas picked Girona v Barça for the Miami match.  The collective members of the Republic are unlikely to cause trouble abroad, if you see what I mean.

As Simon Inglis pointed out in his excellent book ‘Sightlines’ (see below), the architecture of a stadium has a big influence on its atmosphere, and there is no way that architects have always got it right.  When Real Sociedad replaced their small and densely-packed Atocha stadium for the municipal horror of Anoeta in 1993, it was on the cusp of the era of multi-use arenas, and the athletics track (a typical feature of the old Bundesliga aesthetic) killed something in the club, destroying the intimate sepia lifeblood of the old identity.  Concrete edifices tend to hang around for too many years, but on Saturday afternoon Sociedad returned home after three games in the wilderness to a three-quarter finished new Anoeta, the old athletics track gone, the pitch dropped 2 metres and the crowd hollering in the sun, in something that resembled the old days – as if the club’s real identity had been put on hold for 25 years. Bizarre but true. Architects eh? Who needs ‘em? 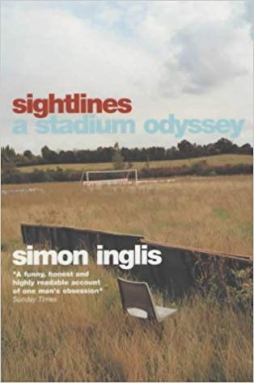 Barcelona were fittingly the visitors, a team to grace the occasion although they would probably have preferred not to have been the honoured guests.  Their record in Anoeta has not been good since Sociedad returned to the top flight, and the potential distraction of Tuesday’s Champions opener at home to PSV was also a complicating factor.  Busquets and Coutinho could afford to start on the bench, but Sociedad had several key players missing.  Imanol Agirretxe, recently forced to retire prematurely from the game, was given the honour of rolling the first symbolic goal into the net, but it only took a further 12 minutes for home-boy centre-back Aritz Elustondo to do the same in a more official capacity.  The noise was astonishing, the pent-up roar of 25 anodyne years.  It was extraordinary stuff.

Valverde put on Coutinho in the second half, and then more tellingly decided to put Busquets into the fray on 56th minutes.  My new noisy neighbour (some fans have been reallocated) put his head into his hands and muttered ‘no me jodas – ya está’ (Oh shit – now we’ve had it) which turned out to be a perceptive prophesy.  How wonderful that a defensive midfielder can change a game in such a way, just by providing balance and sensible short passes.  Busquets is weird, and I hate him as much as everyone else does, but he has a magical influence that at times Messi does not possess, particularly on days like Saturday. That said, Sociedad missed three clear one-on-one chances in the post-Busquets appearance, Ter Stegen standing up well to Juanmi and the hapless Theo Hernandez (did Real Madrid really buy him?) and Oyarzabal blazing one over before Luis Súarez scored from a scramble at a corner, and Dembele did the same a minute later, courtesy of some characteristic flapping by Real’s goalie Rulli.

Such is the law of Spanish football, in which the saying goes ‘El que perdona, lo paga’ (If you miss your chances, you’ll rue the day), particularly against Barça.  Sociedad played a decent counter-attack strategy, kept Barça pretty quiet and deserved to win, at least on chances created.  But anyway, it was a decent game and a fitting scene for the curtains-up of the new noisier Anoeta era.  Barcelona still look slightly jittery at the back, and slow to control other teams’ quicker transitions.  Busquets may not stay fit, and Ter Stegen won’t always save them, so there’s still hope for this season’s other contenders.

The following evening Real Madrid were down the road in the excellent new San Mames, an example of how to retain a club’s identity and perhaps even enhance it.  This ‘viejo clásico’ (Old Clásico), so-called because up to 2011 it was the most-played fixture in the history of La Liga, is still a raucous affair in which the dislike of all things Spain-central comes to the fore of Athletic’s particular local identity, and Madrid occasionally suffer as a consequence.  In a reverse of Anoeta however, it was the home goalie Unai Simon, hurried back to Bilbao from a loan at Elche when Kepa was claimed by Chelsea, who kept the visitors at bay with a string of fine saves, until Isco finally scored with a rare header, oddly from a Bale cross (it’s supposed to be the other way around).

Again, this was a great game that could have gone either way, and one is always forced to dream, at this stage of the tournament, that democracy is prevailing and that the season is going to be more open.  I’m not so sure.  Madrid look more slick than I thought they would under Lopetegui, and the presence of Courtois intimidates.  On Sunday there was much gnashing of teeth for the two-point lead that has opened up between the big two, but you felt that the sentiment was a bit silly.  Now they have Roma to face on Wednesday, which will neither be silly nor easy.

Atlético, of whom much was expected this year, continued to stumble with a last-moment scrape of a draw at home to Eibar, the young Borja Garcés coming off the bench to save his seniors, whilst the other great hopes for the season, Valencia, matched the result in spirit by failing to dispatch Betis at home (0-0), although their visitors are allegedly made of sterner stuff.  Atlético must now travel to Monaco on Tuesday for a tough game.  Is there an unexpected crisis in the air?

Villarreal got off the mark with a 0-1 win at Leganés but poor Huesca, handed their top-flight home debut on a Friday night, lost at home to fellow promotees Rayo Vallecano (0-1) to a cracking goal from Imbula (check it out on the web), but the miss by Avila in the 70th minute must go down as one of the greats of all time.  Quite how he manages to scoop it into the heavens is a mystery, but he does.  My old mum would have had no problem with that one, even on her weaker foot.  Huesca are probably still slightly traumatised by the 8-2 in the Camp Nou, and now face Real Sociedad next Friday, at home again.  I won’t be there, I promise, although my son is going by car.  At three hours from here, it’s another top-flight venue to add to my list of possibles.  Liga Fever will be there at some point this season, never fear.  Returning to the opening theme, the ground looks like my kinda stadium, nothing fancy – just football.

Oh……and Barcelona entertain Girona next week, which could be a rehearsal for the Miami Vice meeting in the New Year.  Who needs local stadiums and fans eh?  What a dumb idea.  Javier Tebas is a visionary and a diplomat. Can’t you see?

12 thoughts on “Home’s where the head is”