Let’s talk about Barça and Madrid eh?  Five games gone, and by next weekend that’ll be seven (there’s a full programme during the coming week), so how are the big boys doing?  Maybe before we consider the question, it’s worth mentioning the fact that Messi’s performance against Girona, in which he scored (of course), was his 423rd league game for Barcelona which surpassed his ex-teammate Dani Alves’ total – handing him yet another record – this time for the most league appearances by a foreign player in the history of Spanish football.  He’s played 644 for Barcelona’s first team in total, but it’s the league figure which is significant for the statistician anoraks.  Players from previous eras could not enjoy the data-expanding multi-tournament opportunities that modern-day football affords its practitioners, but it’s still worth recording for posterity that up to this moment Messi has managed to score 560 goals from those 644 appearances, which is mildly insane. If you consider the 81 he’s scored for Argentina too, it’s difficult to dispute the argument that he is the greatest player to have ever walked the Earth, largely because if you were to actually forget the mind-boggling stats, he’d still emerge as the only player in history to have ever defied the laws of motion (Physics).

I wouldn’t claim to be the authority on this vexed question, and anyway, the issue of who is the greatest of all time forever melts into meaninglessness and collapses under the weight of the criteria that you need to consider when attempting to determine the answer.  Al I that I can say is that unlike many young scribes of nowadays, and with all due respect to them, I’ve seen quite a few of the claimants to the throne.  I saw Best, Maradona and Cruyff in the flesh, Pele on the TV and of course, the great Matt Tees at Grimsby Town.  I’m not quite old enough to have seen Di Stéfano, but I don’t really think there’s much debate.

The other point is that Messi has lasted the course.  This is his 15th season at Barça, and in the first two (2004-2006) he only played 24 times, a fact which has failed to drag down his average of just over 30 league games per season.  2013 was the only year in which he was side-lined for anything approaching a worrying length of time (with muscle problems), but for a player whose style always looked as though it would invite rough treatment from the bully boys, and whose career was threatened in its infancy by hormone-growth deficiency, things have gone pretty well.

My other claim to judgement on Messi is that I was at the Espanyol v Barça derby at the Montjuic in 2004 when he made his league debut, coming on as substitute for Deco, in October of that season.  Reading back over my report for ESPN, I make no mention of Messi, as if his debut were of no significance – as indeed it wasn’t back then.  People had been talking about him, and some Barça fans had told me to watch out for him, but the historic moment passed me by.  I’ve often ruminated on that one, but never confessed it until today.

Maybe it was my embarrassment at not mentioning him, like I’d just realised I’d been in Dallas in November 1963 and was wondering what all that fuss and noise had been about.  I was there when Messi made his league debut, in a two-thirds full stadium, but only because I was in the city for an educational conference and wrote the piece for ESPN anyway.  I had no idea that I was witnessing the beginning of something rather special.  As Homer (not the writer) might have said, ‘Doh!’ 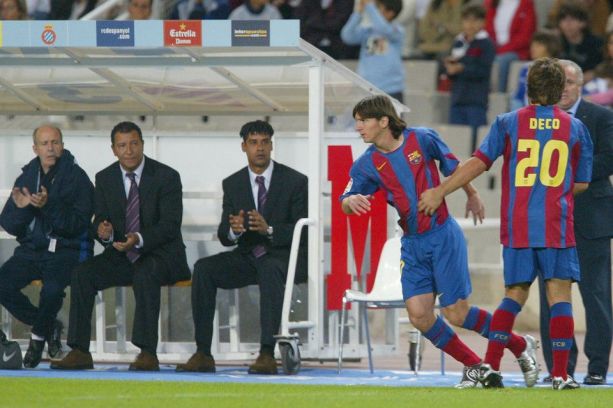 History’s central moment, missed by an ESPN scribe 25 metres to the right

Talking of the meringues, they’re still behind Barcelona on goal difference, but there’s a feeling of optimism around the Bernabéu at the moment that seems to be of a different nature from before.  Afraid to be too critical of the ‘pass to me so I can score’ Ronaldo effect over the past few seasons, the Madrid press appear to now feel as liberated as some of the players do in his absence.  Ceballos is getting minutes, Asensio seems to be taking on the future-leader role, Odriozola made a promising debut and Mariano looks half decent.  Meanwhile, Isco, Modric, Casemiro and crew continue to steer the ship, Bale looks reborn and Courtois looks like he’s there to stay.  Add the interesting-looking Vinicius to the brew – which Lopetegui will surely do quite soon, and Real Madrid have done exactly what they should have done a couple of years ago, namely mix up their options and stop relying on the old serve-the-BBC formula.  It won them the Champions League, but it never really threatened Barça’s hegemony of the domestic scene.

Against Espanyol on Saturday they didn’t play particularly well, although the visitors were slicker than expected. As Odriozola commented to the pitch-side interviewer after the game, ‘We’re not going to win 5-0 every week’, which were wise words from such a young head.  The amount of games facing RM in the next two weeks cried out for some squad rotation, but the result was still favourable. Interestingly, RM have only conceded three goals in the league so far, as if their new configuration may favour more defensive solidity at the expense of goal-scoring Ronaldo-led orgies. With Bale, Asensio and Isco around, it’s never going to be boring, and so a more efficient but less ego-fuelled side may do better than expected this season – although it’s early doors yet.

Elsewhere, Alavés stuffed poor Rayo 1-5 away from home, hauling themselves up to 3rd place in the table, a result somewhat influenced by the expulsion of Rayo’s Ba on 33 minutes.  That’s three on the trot for Alavés, and it was their biggest away win in the top flight.  Check out ex-Athletic man Ibai’s first (Alaves’ second).  Goal of the weekend I suspect.  And whilst we’re on stuffings, Levante conceded six at home to Sevilla, something of an odd result given Sevilla’s recent form and the fact they played in midweek.  Levante hadn’t been setting houses on fire, but had shown no previous indications of such a collapse.  Villarreal and Valencia continued to disappoint with a 0-0 bore draw which neither of them either wanted or needed, and Betis clawed back a 0-2 deficit with a 2-2 draw at home to Athletic, also reduced to ten men after Susaeta saw red.

Of the midweek fixtures, Sevilla v Real Madrid now catches the eye, and then the Madrid derby in the Bernabéu on the 29th.  I’ll be at Real Sociedad v Valencia next weekend but I’ll sadly miss the Rayo game in Anoeta on Tuesday due to a trip to England.  Until next week…..

4 thoughts on “Messi records another record”